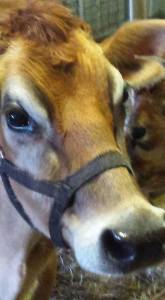 is supposed to calve in September, so we’re not milking her right now. This means that early morning chore time is a lot more relaxed, and I’ve been using my extra barn time to trim the dairy goats’ hooves.
I had let them get a little long, so I had several slow days of trimming to do, little by little, shaping them up. My goats aren’t fans of the process. Trimming their hooves doesn’t hurt them, but  I have to pull their legs into weird positions to do it, and they don’t appreciate that while they’re trying to eat their breakfasts.
I don’t blame them. I’m not a big fan of that process either.
Hoof trimming has always been one of my least favorite goat-related jobs, and I’ve never been much good at it. My poor goats sported some weird looking feet because I was always so scared of cutting off too much that I never cut off quite enough. I knew what the problem was so I tried delegating that chore. Unfortunately, I didn’t want other people to cut off too much either. My long-suffering husband trimmed our buck’s hooves for me, while I stood there “helping.” This consisted mostly of me yelling, “Not so much! Be careful! You’re going to hurt him!”
This did not go over well. I was promoted right back up to solo hoof trimmer. 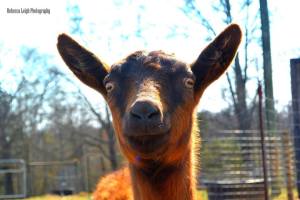 But anyway, as I was trimming this morning, it occurred to me that I’ve actually gotten a lot better at this whole process. My goats’ feet look like….well, goats’ feet.( Instead of  pointed elf shoes, which is what they look like when left overgrown)  This is an improvement, and it came about because I got brave about whacking off the overgrown hoof without worrying about cutting too much and hurting the foot. Sure, I’ve occasionally cut a little deep and seen a drop or two of blood, but I’d learned that it’s preferable to do that than to allow an overgrown hoof to cause walking and health problems long term. Hoof rot is no joke, my friends. Trust me on that. Better to trim a little too much than too little. Lesson learned.
Unfortunately, this learning curve of mine hasn’t applied across the board. Witness my poor Granny Smith apple tree. 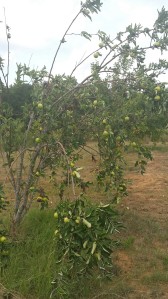 Yep. Pitiful. I pruned it last winter. Sort of. But it seemed so wrong to cut off perfectly healthy branches that I didn’t cut off nearly enough. And the result?  A big broken mess at harvest time.
As I was picking the apples to make my first batch of apple butter, I resolved to prune that tree with a vengeance this winter. I could clearly see that my mercy wasn’t helping that tree one bit. Quite the opposite. If I’d pruned that tree as aggressively as I should have, it would be a lot healthier now, and I’d probably have gotten a lot more apples.
And the whole thing got me to thinking. Sometimes I reflect upon God’s tendency to swat  gnats  with a sledgehammer. Have you ever noticed that phenomenon? For example, you might pray for help managing your finances responsibly. And then, whap! You have a huge totally unexpected expense that forces you to count every penny twice for six solid months as you claw your way out of the financial hole you got plopped in. That kind of thing.
Well. You learned how to manage those finances, now, didn’t you? But boy. Couldn’t God have been a little gentler? That seemed a little…um…excessive. Which is why I tend to couch my prayers with pleas for mercy.  (“Not too much though, God, okay? Change me, but don’t hurt me!)
And today as I was picking apples off that poor struggling tree, I thought about how pruning is described in the Bible, and I wondered if maybe God was sending me a message right there in my sad little orchard.  Reminding me to trust Him even when He seems a little heavy-handed with the pruning shears…and probably also to stop trying to serve Him in an advisory capacity.
Yeah. I’ll try to remember that.